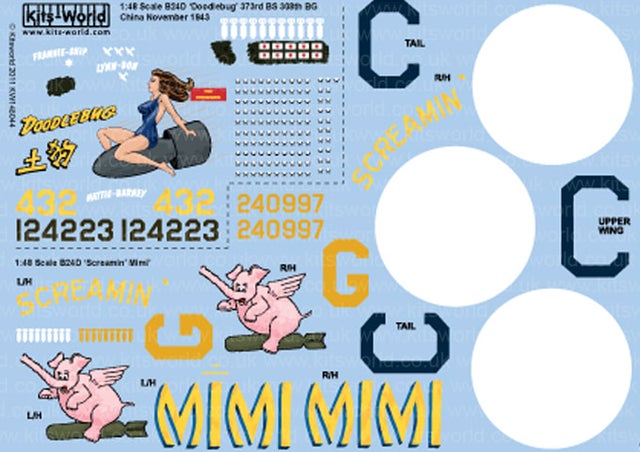 Doodlebug, Bomb Squadron. In addition to the eleven bomb mission symbols and the ten Jap flags (aircraft shot down), 'Doodlebug had 120 snow-capped mountain symbols stenciled on her, representing 120 trips over the HUMP!

The 308th... performed some of the most accurate bombing of the US Army Air Forces and used the first American smart bomb called the Azon. The 308th also sustained the highest casualty rate in the USAAF, for its missions were long and hard, often conducted at very low level and at night through the very heart of Japanese-occupied territory and over their controlled sea lanes.

The 308th flew nearly 600 combat missions under conditions that would have been deemed impossible in Europe. When the Army Air Force Headquarters in Washington tallied the bombing accuracy of every bomb group in combat, they were astonished to find that the 308th led them all.

​QUANTITY IN STOCK: One (1) Currently Available.