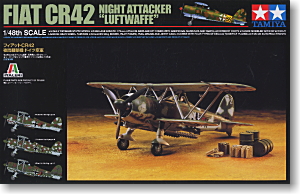 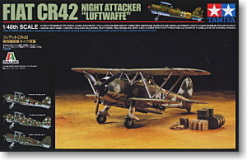 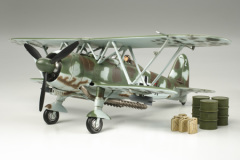 The Fiat CR42 Falco was Italy's main fighter at the start of WWII and was based on earlier successful biplane designs. It was essentially a modernized biplane, with a metal fuselage frame, aluminum wing frames, and smooth fairings for its fixed landing gear. Like other contemporary biplane fighters, it had excellent maneuverability, but was outdated when WWII began. Nonetheless, it proved useful in the Mediterranean theater and was used extensively in the ground attack role. When Italy surrendered in 1943, German forces took over existing Italian hardware for their own use, and they employed the CR42 in night harassment, anti-partisan, and trainer roles in both Italy and the Balkans.

Kit Features: The Kit is re-packaged version of a plastic model kit originally manufactured by Italeri; High-quality 1/48 scale assembly kit model of the Fiat CR42; Classic biplane form accurately reproduced; Can be modeled with or without landing gear wheel spats to depict different combat conditions; One pilot figure and an ample set of accessories including 50kg bombs, fuel drums, and jerry cans included for a variety of display options and Comes with markings for 4 different aircraft, including all new markings for an aircraft on the Western Front.

IN STOCK: One (1) Only Available